You are here: Home » Wildlife 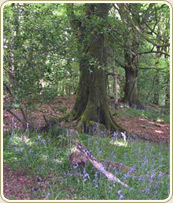 Habitats and vegetation…
A habitat is generally understood to mean simply the place where an organism lives. It may also refer to the place occupied by an entire community of organisms. There are three different woodland habitats at Barna Wood.

1. Mixed deciduous woodland
A wide range of native deciduous tree species occur at Barna Wood and include oak Quercus robur, ash Fraxinus excelsior, alder Alnus glutinosa, birch Betula pubescens and elm Ulmus glabra. Non native species such as beech Fagus sylvatica and sycamore Acer pseudoplatanus are frequent throughout the wood. In areas of the wood that are least disturbed this woodland type supports a varied understorey of shrubs, herbs and mosses. Holly Ilex aquifolium an evergreen shrub is frequent in the understorey. In spring time carpets of Bluebell Hyacinthoides non-scripta and wild garlic Allium ursinum are a frequent occurrence.

Woodlands dominated by beech are generally species-poor. Beech has a shallow rooting system which makes it difficult for other trees and shrubs to thrive underneath the dense beech canopy. The leaves on beech trees usually emerge earlier in the year and out-compete other plant species for light. The beech woodland in Barna wood is particularly species-poor and understorey plants are almost totally absent, owing to the intensity of trampling and disturbance caused by pedestrians.
Beech woodlands are pleasant places to walk through as there are usually very few obstacles such as brambles and hawthorn bushes to get in the way. Over use of this part of the wood by pedestrians has removed the few ferns, herbs and mosses and that would normally occur. Young trees are also missing from this habitat and this has serious consequences for the future of the wood. Once the older trees have died off there will be no younger trees to replace them.

The alder wet woodland is located on the eastern edge of Barna Wood, and has developed from part of a more extensive wetland system that was in existence at the site prior to the development of the football pitches.

The wet woodland has a relatively open canopy dominated by alder Alnus glutinosa with some ash Fraxinus excelsior and grey willow Salix cinerea. Occasional juvenile ash and alder occur in the shrub layer. The field layer is dominated by wetland species such as tall fescue Festuca arundinacea, and meadowsweet Filipendula ulmaria, water horsetailEquisetum fluviatile and clumps of yellow flag Iris pseudacorus. The are luxuriant colonies of lichens on the alders with foliose and fruticose species such as Evernia prunastri,Parmelia caperata and Ramalina farinacea,

Want to get involved? Volunteer with Conservation Volunteers Galway!

The Barna Woods Project Biodiversity Report and Management Plan is available for download in its entirety (54mb) at http://galwaybiodiversity.com/downloads/ 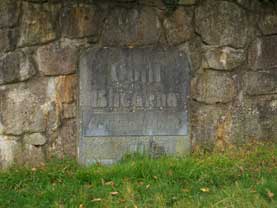